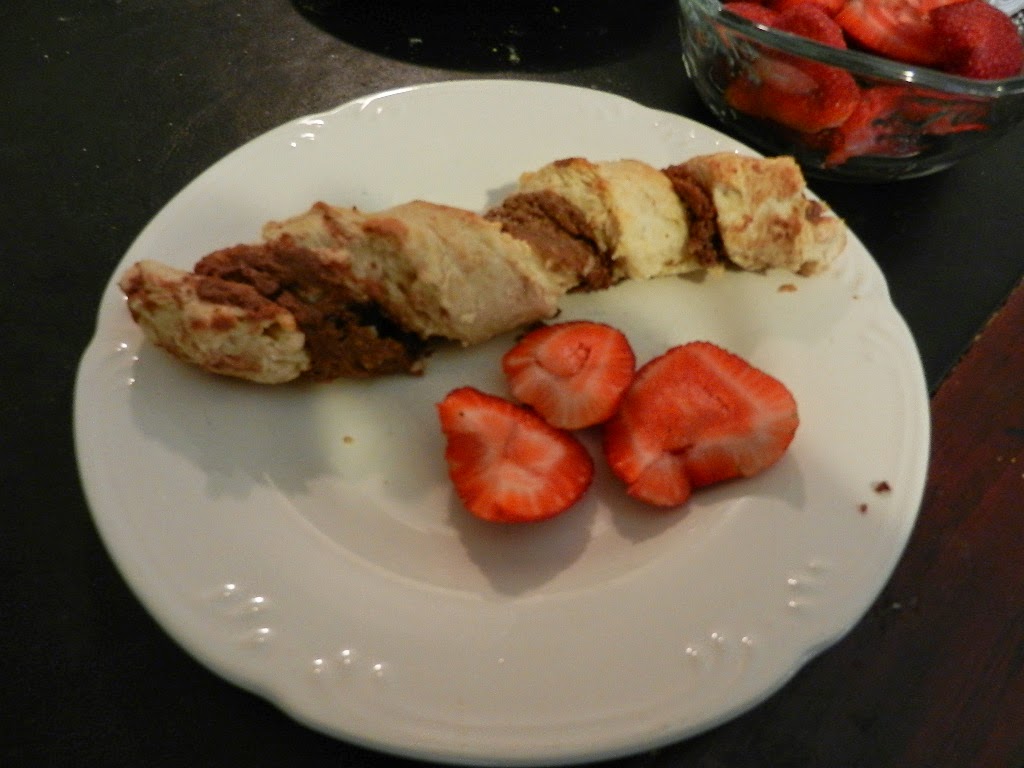 Do you remember forever ago when I posted about my homemade biscuit mix. If Not you can Find it here. I have another recipe for you that uses that mix. My Family and I have a new love and that is hazelnut spread. I especially love it with ice cream. Unfortunately I do not have an ice cream recipe for you but a breakfast one.

This week my daughter asked for cinnamon rolls for breakfast. I did not have 3 hours to make her real ones so I made a quick version with biscuit dough, and I also decided it needed hazelnut spread with it. And a side of strawberries. It was so good, I have to share it with you. 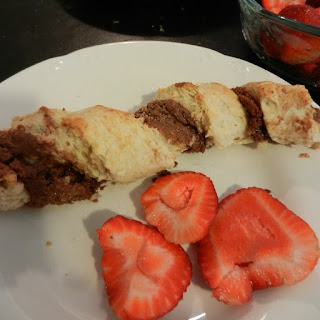 Put two cups of the biscuit mix in a bowl and make a well, pour in the 2/3 cup milk in slowly incorporating it into the mix, if is ends up a little sticky you can a little more mix. It should form a ball that you can kneed slightly. At this point you have biscuit dough.

Roll it out how you would for biscuits, but not as thick, less than 1/2 an inch. Slather on a layer of Hazelnut spread then sprinkle with cinnamon and sugar. Cut the dough into long strips that are about 1/2 in wide. I usually end up with 10 to 12 strips. Twist each strip and place them on a baking sheet. Cook them in a 425 degree oven for 12 minutes or until they are golden brown.

You can also glaze these if you want, but they are pretty sweet without. 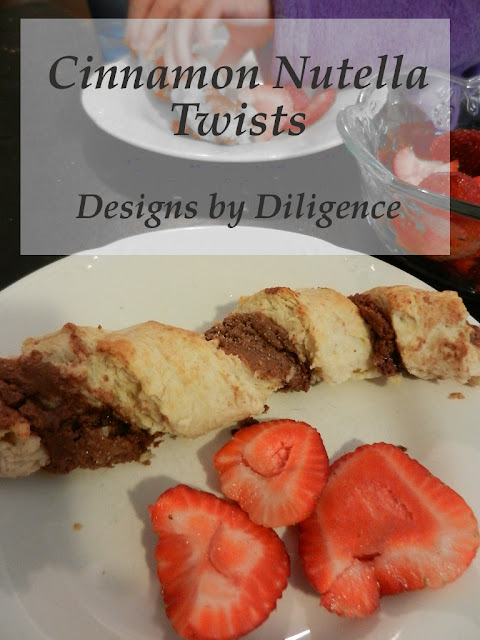 More recipes you will love:

frozen waffles
Posted by Julia Schwartz at 8:10 AM No comments:


One of the first things I like to go look at when I enter a grocery store is the shelf that has the over ripe produce on it where they have reduced prices. I’ll call it the un-pretty shelf.  The only bad thing is you never know what is going to be there. I like to plan everything out before I go and stick to my list. The un-pretty shelf is always my lucky splurge, where I’m not really splurging.  Usually I can make a lucky guess at what will be there because of what is in season and what was on sale last week.
The thing that is great about over ripe or bruised produce is that there really is not anything wrong with it, especially if you are going to cook with it and within the next couple of days. The store wants to sell things that are pretty, and we customers also want to buy something pretty, but what to do with the un-pretty.  Instead of the store losing profits, it gains at least something back by selling the un-pretty at reduced priced.
This week on the un-pretty shelf they had bags of tomatoes. Each bag had about 10 tomatoes in it and the bag was priced at .99 cents. Score! One of the things that was on my list was tomato sauce. I was overjoyed at the prospect of making tomato sauce for cheaper than what I was going to buy it for.
The store brand sauce was on sale for 1.59. It come in a 640 ml jar (did I mention I just moved to Canada) which is like getting a 32 oz jar. To make my sauce I picked up some celery, and a can of tomato paste. Now if I was wonderful shopper I would have already had tomato paste at home from when I stocked piled 40 of them when they were only on sale for .25 cents, but I am not. I had to pay .54 cents for mine.  I had everything else I would need at home.
At home I was able to make 32 oz of sauce that I put in freezer containers for use throughout the week.
I paid .99 cents for the tomatoes
.54 cents for the tomato paste
.15 cents for the onion
.10 cents for the amount of celery I used
.10 cents worth of spices
So the grand total of my sauce was a 1.88.

In a way I guess you could say I lost out on .30 cents, especially when I think about the tomato paste I could have gotten on sale.  Though I guess I will take the .30 cents when I count in the fact that we will get to eat homemade sauce for the week and I know exactly what went into it without any preservatives and extra salt.  That is priceless.

Posted by Julia Schwartz at 7:57 AM No comments: