There was an ancient practice of catching your tears of grief in a vessel when someone died. When it was time to bury or cremate that person your vessel of tears would go with that person. This past year I cried all of my tears in to baby hats. 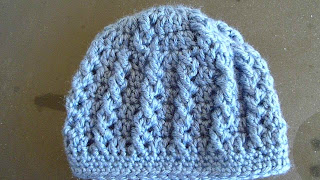 In February of last year my husband and I found out we were expecting. We had only been trying for a couple of weeks and I was pregnant. We were excited about having our dreams come so soon, and at the same time frightened at expanding our family and change. Within a week of finding out I started having complications. It came about that our precious little one was an ectopic pregnancy.  The doctors were never able to locate were my baby decided to grow, but it was not where it should have been, so it was only growing at 5 % instead of 100 %. My husband and I had to make the decision to end my pregnancy. At 11 weeks into making dreams and a new family I took a shot that would end all those dreams.  Then for another 11 weeks I had to go to the doctor and get my blood taken to watch my pregnancy numbers go back down to 0.

During all of this time I was crocheting. I was so excited to start making things for my new little one. I started making hats, sweaters, little booties. When we found out we would not be able to keep the baby I could not bring myself to stop. When the grief became overwhelming I would get out my hook and I would make a hat, some days that hat would turn into three hats. Often times I could not even see what I was making for the tears that were dropping on to the hat. After three months I had two under the bed totes full of baby hats, diaper covers, booties, and sweaters. After that time I found I did not have to go to my hook so often to shed my tears. 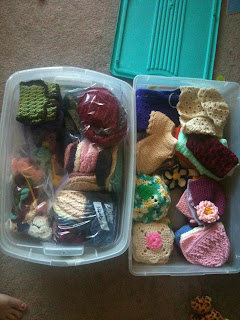 Now that a year has passed I am down to just one tote. Some of the hats have been given to friends. Some have gone to a local hospital. And I have even sold some.

I wanted to tell you dear friends how much those hats mean to me. I have poured my dreams and prayers into those hats and I pray that the baby that fills them will grow big and strong and that they will be cherished and loved. When I give you a hat or other crochet items, I’m not just giving you something to keep you warm I am giving you something that has been saturated in prayer and thought for you and even sometimes tears.
Posted by Julia Schwartz at 9:14 AM 1 comment: