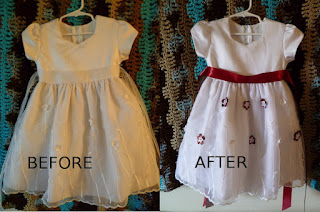 A while back my Daughter was asked to be a flower girl in a wedding. I procrastinated in getting a dress for her because I was not sure on how she would handle being a flower girl and the price that I would have to put up for a dress for her. The Wedding is this month so I was really starting to run out of time.

I knew that I did not want to spend over 30 dollars on a dress, these days I don’t even spend that much on myself. I started looking around for dresses that would fit what the bride was wanting and still fit in my budget. A friend of mine offered me an all white dress. It was not what we were looking for but I took it thinking maybe I could do something with it.

After looking at it for a few days I realized that it would not be hard to change out the sash and add some colored flowers. I of course took pictures for a step by step guide to help you along if you would like to try it too. 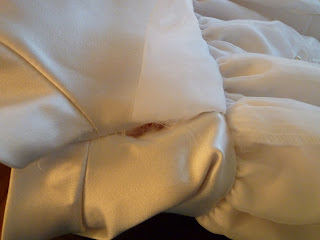 The first step is that I used really sharp scissors and ripped or took out the seam where the sash and ties were. Once that part was open the ties came right out and the sash stayed on the dress because it was still attached at the waist. I folded the old sash down so it would be hidden by the new sash. 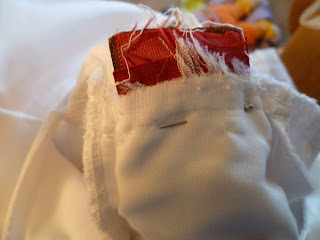 The second step is that I measured out my red ribbon to go across the old sash and through the open seams. I cut and pinned it down where I wanted it. I repeated the same thing with the ties. Once everything was in place I sewed the seam back up including the old sash, new sash and new ties in my stitches. It was such a small area to sew I did not even get my sewing machine out; I just did it by hand.

The flowers were a little bit harder for me, but that is mainly because I’m not a good cutter. The flowers that were already on the dress had five petals. I traced that flower on to some paper, and cut it out. I then pinned the paper flower to my white ribbon and cut around the paper flower. Once the white flower was cut out I pinned it to the red ribbon and I cut a larger flower around it, and I repeated the process with the brown ribbon.  After that I sewed a pearl bead onto the middle of the flowers.   While I was sewing the bead on I sewed it onto the dress as well. 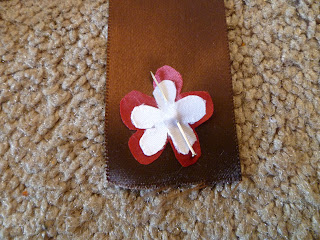 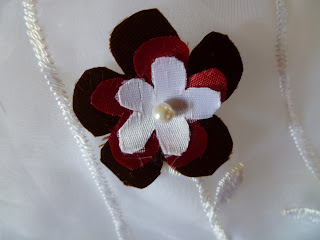 Posted by Julia Schwartz at 3:25 PM

Email ThisBlogThis!Share to TwitterShare to FacebookShare to Pinterest
Labels: sewing